Posted on August 9, 2011 by blogaboutwriting 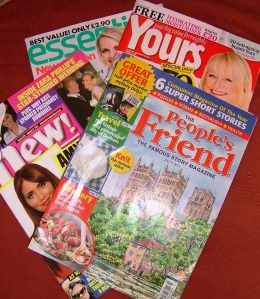 I have now written to 28 different magazines! And for July’s task, I wrote to: Essentials, Yours, The People’s Friend and New!

This was the first time I’d ever read ‘Essentials’ and I really liked it! (No celebrity gossip, for a start!). I would say, judging from the fashion, articles and adverts, that this magazine is aimed at ‘feisty forty-somethings’! In fact, I liked it so much and they had such a good subscription offer on (£19.99 for 12 issues + a set of pamper goodies worth £32), that I bought a subscription for a friend! (And no, I’m not on commission – I wish I was!)

Their letters page is called ‘All About You’ (‘these pages are for you to share your news, views and ideas’). They pay £30 for every ‘star letter’ and presumably nothing for everything else. Slightly disappointing 😦 Ah ha, BUT they have more than one star letter, so you’ve got more than one chance each month of scooping a prize!

One of the star letters in the issue I read was a sorry tale of a woman taking her boss’s dog for a walk with hilarious repercussions. The other was a photo from the 1960s, of a reader’s youthful Mum having fun at Pontin’s. Ah yes, and that’s another thing – they didn’t publish any letters referring to earlier issues. So I reckon Essentials is a rare thing – a magazine that you don’t have to buy and ‘study’ before submitting a letter to them. Just send them something amusing or thought-provoking and hey presto, you could be £30 richer! And in print of course, which is just as important!

As one of the letters was entitled, ‘The Best Things In Life Are Free’ and was about a reader’s satisfaction when a horrible sales assistant was told off by her manager, I wrote something in a not-dissimilar vein, about my total joy when a bullying ‘white van man’ on the motorway was pulled over a few junctions along, by an unmarked police car. Ah, that really did make my day!

If you have something to say to ‘Essentials’, email: Essentials_feedback@ipcmedia.com Or write to: Essentials, Blue Fin Building, 110 Southwark Street, London SE1 OSU.

PS: They are looking for ‘book reviewers’ too and you just have to contact them as above and say you’re interested. It doesn’t give any details but I assume you get the book(s) in return for writing a short review. They print 3 each issue.

My writing buddy Sally has also recently posted some information about writing for Yours (they take fiction!) so pop over to her blog here if you want to know more.

This is a magazine definitely aimed at the slightly more mature lady. I wasn’t too keen on the rough paper it’s printed on but I suppose that helps them keep the costs down. It’s pretty good value for £1.40 and the issue I bought was half-price, so only 70p.

The letters page (‘Meeting Place’) is described by the editor as ‘the heart of the magazine’ and they welcome funny stories, pictures or rants (‘letting off steam’, as they describe it).

Every letter printed receives a £10 high street voucher and the star letter gets £25. Readers’ tips get a £10 voucher too. They printed 16 letters in the issue I read, plus 1 tip; 1 poem; 5 x ‘senior moments’ (up to 50 words of something daft you’ve done or said!). There are also a couple of slots on the letters page for which they pay £25: ‘I followed my dream’ (maximum 200 words) and ‘Amazing at 80 plus’ (no word limit given for that one, but they do want a photo of the amazing octogenarian that you’re writing about).

I was inspired by one of the published letters about life’s simple pleasures, which ended ‘I wonder what other readers would choose?’ and sent them a poem about my favourite things, for their ‘Poetry Corner’ slot.

If you want to write to Yours, here are the details: Meeting Place, Yours magazine, Media House, Peterborough Business Park, Peterborough PE2 6EA Or email: yours@bauermedia.co.uk

New! (don’t forget the exclamation mark!) is full of celebrity gossip and people I’ve never heard of! (I feel old!). Given the adverts for mobile phones, slimming aids and beauty products, it’s definitely aimed at the ‘younger woman’! They do have a small letters page and the ‘Letter (or text) of the week’ gets a prize (a luxurious candle range set, worth £120, in the issue I looked at).

All three letters printed in my issue referred to articles in earlier issues of the magazine and the texts were comments about celebrities currently in the news, so you really need to read ‘New’ if you want to submit to them.

I sent them an email commenting on the (new!) relationship between Chantelle Houghton and Alex Reid. Yes, I know, earth-shatteringly important stuff! And if you don’t know who they are, then you must be even older and more out of touch than me!

Ah, what a contrast. The lovely People’s Friend. No celeb’ gossip here, just lots of articles and stories. Definitely aimed at ‘seniors’. The website says, ‘to appreciate the full flavour of ‘The Friend’, it’s best read in a comfy chair with a hot cup of tea and lots of time to spare.’ Sounds good to me, whatever age you are.

The letters page (‘Between Friends’) has about 9 letters each week. The ‘letter of the week’ receives a special prize (but it doesn’t state what that is!) while all the other letters receive a tea caddy and a pack of loose tea. Ah, that’s why you need the comfy chair and lots of time.

Over half of the letters included a photo, so I decided to follow suit and I scoured my piccies for something suitable. I sent them a picture of my chap holding a golden eagle! Well, it’s different (someone had sent a picture of a tortoise, so why not?). Don’t know what he’ll say about possibly making an appearance in The People’s Friend, but I’ll cross that bridge if I come to it (he never reads this blog and if he did he would KNOW what I am up to!).

This entry was posted in Magazine Madness and tagged Essentials, magazines, New!, People's Friend, writing letters to magazines, Yours magazine. Bookmark the permalink.