Posted on October 5, 2011 by blogaboutwriting 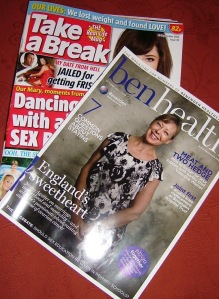 Before I start my ‘report’ for this month, I have a few ‘successes’ to tell you about. Last month, I had letters popping up all over the place and won some rather nice prizes.

So, at the risk of sounding like a big, fat show-off, here we go:

The People’s Friend – yes, that photo I told you about, of His Lordship, holding a golden eagle, was actually published! (And he seems quite proud! Bless). Prize: Tea caddy and some loose-leaf tea; Love It! – my letter commenting on a rather ‘rude’ article scooped a very welcome £15 cheque; Mail on Sunday – Star letter (more about that below); Pick Me Up! Sent me £25 for a tip + photo that I sent them back in July.

I’m also seeing some success for ‘second round’ letters. ie: if a magazine didn’t print my letter the first time, I’m having another go. NB: these don’t count towards my goal of 52 different magazines (but are in addition), so it’s not cheating!

Bella – a letter commenting on an article in a previous issue has been published. Prize – £10 cheque; John Lewis ‘Edition’ magazine – My ‘star letter’ about an article on Annie Lennox in a previous issue, which is being published in their Christmas edition, has won me a case of 12 bottles of Waitrose wine, which just arrived today. Hic! Woman’s Weekly have published a letter to them about how my sat-nav got me very lost. (Another £10 cheque on its way for that one); Prima (current, November edition) my letter about annoyingly lazy people at the gym parking in disabled spaces has won a year’s subscription to the magazine.

Not bad, eh? (What do I keep telling you…? And I’m not writing anything ‘earth-shattering’, believe me).

So, back to September. Last month I wrote to: The Mail on Sunday, Heat magazine, Take A Break, Morrisons magazine and ‘BenHealth’ which is the free quarterly magazine I get with my health insurance company. (It’s always worth checking any ‘niche’ magazines like that, to see if they pay for letters, as they probably won’t get as big a postbag as many of the bigger mags).

The Mail on Sunday has a full page of letters towards the back of the main paper and the Letter of The Week wins a one-night stay for two at any of the Small Luxury Hotels of the World. These are very expensive hotels (some are £400 a night) so, guess what – it’s on a room only basis! I’m going to have to take a packed lunch and dash out to McDonald’s for breakfast.

Most of the letters published refer to articles in the previous week’s issue of the paper but I thought I’d try something a bit different and (at the time – before this heatwave!) topical.

I wrote a letter about how glad I am that summer’s over (yes, I know, I’m a misery-guts. I didn’t completely mean it, of course!). The good thing about MoS is that it’s a weekly newspaper, so you don’t have to wait ages to see if you’ve been printed. I emailed off my letter and it was printed just a few days later, in the next issue. Result!

Email: letters@mailonsunday.co.uk You have to include your full name, address and telephone number and you get a nice responding email asking to ensure that your initial ‘letter’ contained those. Or, if you prefer snail mail: The Letters Editor, The Mail on Sunday, Northcliffe House, 2 Derry Street, London W8 5TS. You can even fax (does anyone actually fax any more?!): 020 7937 3829

Heat is packed with tons of celebrity gossip – and not a lot else. There are photos, tittle tattle about the ‘stars’. Their letter page, ‘Dear Heat’ only has about 4 letters and there was a prize for the star letter (a very nice Sony Personal Video Recorder – PVR).

They also pay £200 for your ‘unposed’ photo of a star (eg: if you spotted a star in the street, looking in a shop window, for example, and manage to take a sneaky snap of them). Yes, they are encouraging paparazzi behaviour! (Still, I wouldn’t say no to £200!)

I wrote about Jessie Wallace (East Enders actress) who rather dramatically called off her wedding just hours before it was due to take place because she’d discovered her fiancé was a love rat! (Yes, this is real life – not an episode of the soap!). I wrote the email on the day the news broke, so hopefully that was topical enough to make it into next week’s edition! (But I must admit, I haven’t had chance to check the magazine so I haven’t got a clue if they printed it).*

I remember reading somewhere that Take A Break is the top selling weekly magazine, which is why it can afford to pay so well.

‘We’ve got Mail’ is their letters page and they pay £100 for the star letter and £75 for all the others! ‘Silly or serious? Sensible or barmy? Tell us what’s happening in your world’.

The letters tend not to be comments on previous issues of the magazine; they’re more likely to be sad or funny life stories – how a couple got together, or how someone’s dog saved their life.

Letters must be exclusive to the magazine (that goes for them all though) and you must include all names of those involved and a telephone number. Some of the letters had a photo with them so I reckon if you sent a photo with your letter you might be one step ahead of everyone else. Take a Break, FREEPOST LON12043, H Bauer Publishing, London NW1 1YU. Email: tab.features@bauer.co.uk

Take A Break World: £100 paid for each photo sent in (and 10 published each week), so if you’ve got anything cute or funny (most seem to involve animals or children or people dressing up in strange outfits), then it’s worth emailing them in. You must give full names and ages of everyone in the picture (not the animals, I assume!) and you must include your daytime phone number. Email to: tab.world@bauer.co.uk or post to: Take A Break, FREEPOST LON12043, H Bauer Publishing, London NW1 1YU

I wrote a letter about something funny I overhead in my local pharmacy recently. I’m not sure that it’s the kind of thing they publish, to be honest, but I was a bit stuck. What I really want to do is send them a silly photo, as that seems like a fairly easy way to earn £100 but all my silly photos are already ‘out there’!

‘Your Shout’ is the letters page in Morrisons magazine and you can either submit directly via the page in the on-line magazine or by writing to: Your Shout! 40 Clifton Street, London EC2A 4DX. The star letter and recipe each win £25 of Morrisons vouchers and the published letters in the current issue (September/October) were singing the praises of Morrisons and the magazine. Sooo, I followed suit and wrote a letter about the flowers and plants they sell in Morrisons stores.

I suspect you can only write to this magazine if you’re a member of the ‘Benenden Healthcare Society’ so I won’t say too much about it. They give a prize for the best letter, which this month was a ‘Love Your Gut’ gym kit, including a pedometer and skipping rope and healthy things like that.

I wrote about an interview in the magazine with actress Jenny Agutter, which I somehow managed to give a medical ‘twist’ (all the published letters were about health matters).

* Top Tip (that I’ve learned over the last 9 months): if you’re writing to magazines, keep an eye on them, to spot whether your letter has been published. Most of them won’t tell you and there’s a danger that a) you’ll miss seeing your masterpiece in print and b) won’t know to chase your prize – if necessary! I am still chasing a couple of mine…! Not mentioning any names but Buzz magazine, for a start.

This entry was posted in Magazine Madness, Magazines and tagged Heat magazine, letters to magazines, Morrisons. Bookmark the permalink.