‘If The Worst Happens… ‘

Posted on October 26, 2011 by blogaboutwriting 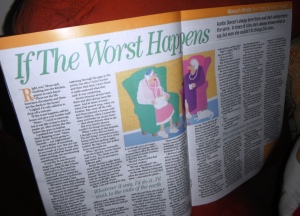 When they first accepted the story, they told me they’d be cutting a couple of lines and they told me exactly which ones they were – and that was all fine – but, presumably because they wanted to get the story onto 2 pages (with a picture), big chunks have had to go.

I don’t think it’s because they hated almost a third of the story – they just wouldn’t have accepted it in the first place and, to be fair, they’ve managed to do it in a way that doesn’t affect the storyline too much – but there was more ‘character development’ and, if I do say so myself, humour, in the longer version.

Never mind – WW is the boss! Once they’ve bought your story, article or letter, a magazine is quite at liberty to do whatever they like with it and as writers, we can’t get too ‘precious’ about our work, can we?

(On a slightly different note, I’ve just terrified myself by writing my entry for the Halloween Writers Bureau 140 character scary story.

I read a few ghostly stories on line, just to get myself in the mood and now I’m imagining all kinds of bumps and strange noises in the house! And it’s not even dark yet! Eeeeek!)

12 Responses to ‘If The Worst Happens… ‘