Me And Jeffrey Archer

Posted on April 8, 2013 by blogaboutwriting 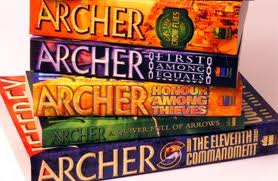 (yes, I know that should really be ‘Jeffrey Archer and I’ but it doesn’t sound as good, imo).

You know how sometimes you spend hours and hours fine-tuning a piece of writing and by the end you’re quite pleased with it? So, you send it off to a competition, full of hope and it doesn’t even get shortlisted?

That happened to me recently with the Choc-Lit short story competition (er… amongst others too numerous to mention).

The winning story’s here if you want to read it.

And then, I dashed off a couple of sentences in about 30 seconds for another type of competition, hardly thinking about it because, after all, the winner was going to be ‘chosen at random’ (or so it said in the rules) and the Tesco Books blog was simply asking in which historical era you’d have liked to have lived and why…

So, it was a surprise when I got an email saying not only that I was the WINNER (of a limited edition Ingersoll watch, worth £175 and a signed copy of a Jeffrey Archer book) but that the man himself – ie: Jeffrey – CHOSE my entry!

This is what I wrote (don’t hold your breath):

“I would like to live in Elisabethan England – but only if I could be a man and a rich one at that! I rather like the sound of all that racing around on horseback, big log fires and servants at my beck and call. I’d also like to have met William Shakespeare and bought him a drink!”

And this is what Mr Archer had to say:

“… It was so difficult to choose a winner from the amazingly rich and varied entries to the competition. Answers to the competition question ranged across thousands of years and all continents, from the Stone Age, via Caesar’s Rome and the glamour of the Jazz Age right up to the present day but I was especially taken with the grandeur and excitement imagined in Helen Yendall’s Elizabethan England. Congratulation’s Helen, you are the victor, winning a highly covetable limited edition Ingersoll “Harry Clifton”* watch. I hope you enjoy it for many years to come.”

*‘Harry Clifton’ is a character in some of Archer’s novels.

I am chuffed! And it just goes to show, that when it comes to writing, you can always be surprised!

Now, whatever you may think of Jeffrey Archer as a novelist (and former politician), there’s no denying that he’s been pretty successful (at the writing, at least).

According to his website, he’s ‘topped the bestseller lists around the world, with sales of over 250 million copies in 97 countries and more than 37 languages of his 15 novels, six collections of short stories, three plays, three children’s books, three volumes of prison diaries and a Gospel.’ (Intrigued by the ‘gospel’, aren’t you?)

And if you’re a fan, you may be interested in the chance to win ‘an appearance’ in one of his novels – see here for more details.

The eBook collection of the 20 best submissions to the Jeffrey Archer Short Story Challenge -which I told you about here – is now on Kobo for free!

And my fellow blogger Patsy Collins is one of the 20 semi finalists! Well done, Patsy.

13 Responses to Me And Jeffrey Archer