Posted on January 21, 2017 by blogaboutwriting 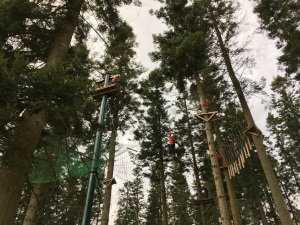 I am one of the little figures up there! Eek!

Here I am, back from a trip to Center Parcs and just about in one piece.

In a mad moment, a few weeks ago, full of the joys of ‘IACGMOOH’, I declared that I wanted to do something ‘adventurous’ and ‘out of my comfort zone’. Fast forward a month and I found myself fifty feet in the air at Center Parcs, on an ‘aerial adventure’ which included two ‘mini’ zip wires and ended with a huge one, all the way over the lake!

I had worked on the theory that children do the ‘high wire’ activity, therefore it must be OK but I had forgotten two important things:

1. Kids are fearless!
2. They do things like climbing all the time. Which, er, I don’t.

So, be careful what you wish for! (This was a Christmas present!). Actually, apart from a few wobbles, it was great but I am still aching!

And I have a cold, which is what happens when you go to CP with four babies/toddlers!

The womag (women’s magazine) market for fiction has recently shrunk still further, as Take a Break Fiction Feast announced the ‘departure’ of their Fiction Editor and a ‘reshuffle’ which means they will no longer take unsolicited manuscripts but will only consider stories from their ‘preferred list of suppliers’.

I am lucky enough to be on this list (but for how long?!) but it’s a pile of poo for those who aren’t and I sympathise (if it’s any consolation, I’m not on the preferred list for My Weekly, so that’s a market I can’t submit to).

Anyway, when one door closes another one opens, as the saying goes and perhaps it’s time for those of us who depend on the women’s magazines for our publishing successes (and a little bit of income) to look elsewhere?

There are still plenty of fiction competitions out there, some of which are free to enter and most of which don’t have the same restrictions (in terms of genre and subject matter), as the womags. Perhaps it’s time to try something different! If you don’t already know about them, here are some competitions that might appeal:

UPDATE: This short story competition appeared to be only open to those who are ‘not yet published’ (ahem, because that’s what it still says on their website) but apparently they actually mean that the story must be unpublished, so it’s actually open to everyone. Sorry if I raised any hopes that this was a competition for ‘newbies only’ but that was how it was (is?) presented. Actually, it’s open to everyone and the theme is open in as much as you can write any kind of story but it must feature a real Tamworth building or address (eg: the Castle – but I suspect many people will choose that. There’s also a Snowdome! And a McDonald’s. I know that because I worked there once, when I was a student).

This is FREE to enter, you don’t have to be a UK resident, there’s no theme and all you have to do is submit a short story (for adults) of no more than 2,000 words.’

Don’t forget to register with the website too. You must do that in order to be eligible to enter.

Bear in mind that winners from the last few years have all been literary and ‘different’, so, my advice would be, you can really let your imagination run wild with this one! Anything goes and I would say, the wackier, the better.

Back for the seventh year, this ‘drabble’ competition (ie: 100 words exactly) has a £2000 first prize and 2 x £200 runners-up prizes, is free to enter and you can enter as many times as you like. But you must be a resident of the UK, Channel Islands, Isle of Man or Republic of Ireland.

I make a special ‘guest’ appearance on Tracy Baines’ blog this week, promoting my e-book ‘Start a Creative Writing Class’ – which now has 2 reviews, both 5 star (and not written by my mum!).

One of my favourite reads of recent times, Appletree Yard by Louise Doughty, has been turned into a 4-part TV series and it starts on Sunday on BBC1. I will be watching!

(Warning: Episode 1 apparently has ‘5 minutes of explicit sex’, so perhaps don’t tune in if you’ve got your mother-in-law round for dinner…)

11 Responses to Just Monkey-ing Around