In my class yesterday, I used my Rory’s Story Cubes® for a 4-minute writing exercise and it occurred to me that I’ve never told you about them!

They’re a set of 9 dice, with pictures on each face, so that’s 54 different images in total (I had to ask my OH to help me with that one. Come on – who can remember their 9 times table?!)

The idea is, that you take 4 or 5 of them out at random and roll them. Whatever pictures are uppermost, you have to include in a story. Have you ever used them?

I think they’re really intended for adults to use with children, to inspire bedtime stories but they’re handy as writing prompts too, especially if your imagination responds to visual prompts rather than words.

I’ve just rolled them to give you an idea of what might come up and we’ve got:

An apple, a crescent moon, a clock pointing to 4 o’clock and a sheep.

Or at least, that’s how I interpret them. If you see something different (like a toenail clipping – ugh, sorry – instead of a crescent moon, or a peach instead of an apple, that’s fine too).

There’s lots of information about them – there are different sets – on the website.

If you’ve written a novel – or even part of a novel – then you might be interesting in the Daily Wail’s (4th!) Novel Writing competition.

It’s free to enter and you ‘only’ have to send them the first 3000 words, plus a 600 word synopsis (but if you win, you have to be prepared and able to submit the complete novel by January 2020).

I’m going to have a go. Not because I think I’ll win but because I read this and it encouraged me: “Even if you don’t win the competition, you might be signed up to write your novel anyway, as several previous runners-up have been. So, there’s absolutely no excuse not to have a go.”

It’s often about getting your work out there. If someone (ie: a literary agent – I don’t mean just a random person like a window cleaner) sees it and likes the idea or likes your style, well, who knows what might happen?

Have a go! Here are the details. And bear in mind, that I have ‘form’! What I mean by that is, the last person who entered a competition that I mentioned on the blog, only went and WON! It was the Retreats For You 4-night retreat in Devon, which my friend Gill – who likes writing and competitions (but I didn’t realise read my blog!) saw on here and decided to enter. Good for her. If you’re not in it (which I wasn’t), you can’t win it. 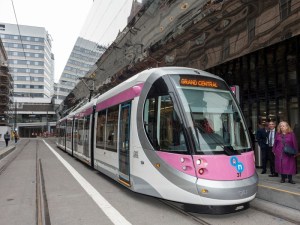 In other news, we went to Birmingham today and went on a pink tram!

I used to live and work in Birmingham but there were never any trams. It was very exciting (as well as being clean, quick and not too expensive). There was even a ticket collector/conductor on board, just like the old days on buses!

PS: Have you watched ‘Fleabag’? I’m a bit late to the party but since I last blogged, I’ve watched every episode. Wow! I thought it was brilliant. Written, of course, by ‘Fleabag’ herself, Phoebe Waller-Bridge. Clever, isn’t she?