In Which I Resort To Gin (& attempt The 2nd Draft…)

Posted on December 3, 2020 by blogaboutwriting 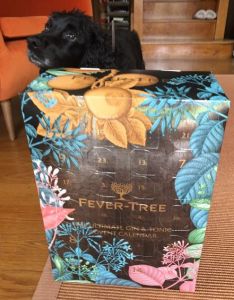 Bonnie is guarding the advent calendar. “Do Not Open until 6pm “

You may remember, last week I reported that my laptop was poorly.

It’s still not right, so today it was collected and taken away to the ‘laptop hospital’ (otherwise known as Curry’s), to be Seen To.

And now I am using another one, which is taking me an age to get used to. Aagh.

It’s all adding to the ‘I-can’t-seem-to-motivate-myself-to-do-anything’ mood that I am in. I can’t focus for more than about ten minutes at a time, so even though I should be working on the novel (more about that in a minute), I’m finding it tough going. Does anyone else feel like this?

At least I have my G&T advent calendar to keep me going. (That’s not quite a bad as it looks, by the way. Yes, there are 24 ‘windows’ but only half of them contain gin; there are cans of tonic in the other twelve).

So, last Friday I had my feedback on the novel’s first draft from my agent.

He had lots of nice things to say (phew) and we agreed on some stuff that can come out and where it all needs a bit more ‘fleshing out’ (mostly in the second half of the novel, which was a bit rushed).

At the moment ‘everything is resolved in Chapter 49′! He pointed out gently that some plotlines can be resolved before the absolute end! (You see, I’m still in short story mode, in which everything does get resolved right at the end).

One of my POV (point of view) characters has to have the POV wrestled from her. She isn’t important enough. (I knew this really but now I have to work out how to weave her thoughts and opinions, or at least, those that I want to keep, into the story, without taking the reader into her head).

Also, he pointed out, that one of my characters has an ‘invisible friend’ (i.e.: I mention someone, quite a few times but she never appears ‘on the page’!) which made me laugh. So, that needs sorting.

My heroine is also not going to have a limp any more (long story but that’s a relief. For her too, I imagine), the current ending doesn’t quite work, plus one of my (important!) male characters needs work. He’s not convincing, or that likeable. Deep down, I knew that. And I also know the reason that he’s not convincing: I Don’t Know Him Well Enough.

For my other two main characters, I filled out pages of a character sheet before I started writing, so I know them pretty well but for some reason, I didn’t do it for him. But I’m doing it now.

I think, in short story writing, you can get away with not knowing your characters intimately. They’re only going to be making a short appearance, so you can take a broad-brush approach (and that doesn’t mean I think writing short stories is easier, by the way – it’s just different) but (I’ve realised), woe betide you if you don’t know your main characters inside out when you write a novel. They just won’t be believable.

There are 100 questions in my character sheet but I think the 5 of the most important are:

It was Kurt Vonnegut who famously said, “Every character must want something, even if it is only a glass of water.” (And if you want to read more of Vonnegut’s pearls of wisdom, there’s a list here).

And that ‘want’ is what drives the whole plot. If your character doesn’t want anything, if they’re quite happy with their life and they’re just tootling along, then there is no story. (One way round this is to make a list of the 10 worst things that could happen to your character and then throw a few of them at him!).

I’m reading a novel at the moment that is pretty dull (I won’t tell you what it is because I don’t like dissing other people’s writing but just to say, it’s by an author that I usually love).

Why is this story not engaging me, I wondered? And then I realised why: because none of the characters (so far) actually want anything, other than to maintain the status quo. Hopefully, it will perk up soon but if not, it will be relegated to the DNF* pile.

I am hoping that I might have inspired myself now, to go away and do some writing: cut that POV, change the ending, remove that limp (ouch), take a metaphorical knife to the invisible friend and reinvent my hero. Easy, right?

This entry was posted in Kate Nash Agency and tagged characters. Bookmark the permalink.