Easter: The Goodies & The ‘Baddies’

Posted on April 6, 2021 by blogaboutwriting

Lucky me, I won two of Helen Matthews‘ books (‘Lies Behind the Ruin’ and ‘After Leaving The Village’) AND a lovely jubbly Easter Egg in a giveaway on her newsletter.

Interestingly, ‘After Leaving The Village’ won first prize for the opening pages of a novel at Winchester Writers Festival. There’s a really interesting interview with Helen here, in which she speaks more about her research for that book and how it’s resulted in her raising money for a related charity.

This year’s Winchester Writers Festival competition (plus others, not novel-related), is open for entries until 28th May. There’s a £10 entry fee but a fabulous first prize of a week at Arvon.

If you want to sign up to hear more about Helen’s books, events, new blog posts and occasional giveaways, you can do so here.

I hope you all had a nice Easter, despite the strange ‘all-season’ weather.

It’s been freezing here and even a bit snowy but on Easter Sunday the sun came out and it was lovely and that was the day I had my brother and his brood joining us (outside, of course!) for lunch, giant Jenga and a table tennis tournament, so I can’t complain. As my sister-in-law said, “It almost felt normal.”

Easter was not without incident, though. (This is the ‘Baddies’ part of my title. OK, bit tenuous, I know but you try thinking up a blog title when you’ve written over 700 posts…!)

We had to take Bonnie to the ‘emergency vet’ on Saturday, as she was struggling with the stairs and had what can only be described as a ‘limp tail’. Turns out, she’s torn the ligaments at the base of her tail but how’s she’s done it, is a mystery.

Anyway, it’s at least a week of ‘complete rest’ (for her, not us!), painkillers and anti-inflammatories. Aagh. It’s really hard to be confined to barracks; we are all so used to going out every day. (In fact, as I write this, she is sitting at my side, staring at me in a ‘why aren’t we going out?’ kind of way). I did venture out for a walk on my own this morning but it felt very strange and very disloyal.

Last night I was invited to a Zoom meeting with some of my fellow Kate Nash mentees. There are 17 of us in total and there were 9 or 10 of us on the Zoom meeting. It was the first time I’ve spoken to any of them because although we’ve had some Zoom workshops as part of the Bookcamp programme, we haven’t actually had the chance to ‘socialise’.

Some of them are in a Whatsapp group but I’ve resisted joining that because it would be yet another distraction! (And, as you know, I am very easily distracted!)

It was very interesting to hear more about everyone’s novels and what stage they’re all at. Some of the mentees are, like me, still working on their first novel, others have finished the first and are now ploughing on with the second (a third was even mentioned by someone! How, how?!).

Some of the manuscripts are out with editors, waiting for a response (a nerve-jangling time). It will be so exciting when the first Bookcamp novel is accepted for publication. One thing of which I am certain: it won’t be mine!

If you’re interested in reading more about my agent at the Kate Nash Agency, who is Robbie Guillory, there’s a fascinating interview with him on the RNA’s website, here.

Anyway, it was inspiring to listen to the others and the chat has given me a virtual ‘kick up the backside’ to start working on the novel again, once I take my mum back tomorrow and my Easter holiday is officially over. #BackToTheGrindstone 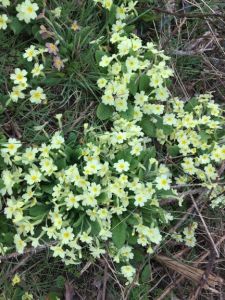 This entry was posted in Bonnie, Kate Nash Agency and tagged Helen Matthews. Bookmark the permalink.

6 Responses to Easter: The Goodies & The ‘Baddies’