(In which I) Carry On Waiting…

Posted on June 3, 2021 by blogaboutwriting

I write to you with a sore left arm because yes, I am all ‘vaccine-d up’, to coin a phrase.

I had my second dose this morning and oh, bliss, unlike the first time, the person administrating the needle didn’t cause me severe pain!

It was just a little scratch in my arm, so insignificant that I’m actually wondering if anything happened! But I do have a sore arm now, so that’s OK then. 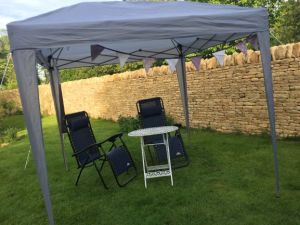 Gazebo taken at a jaunty angle

In other news, we have bought a ‘gazebo’. That’s a posh word for a plastic awning, to be honest BUT with the addition of a few jaunty bits of bunting it does look rather like we’re preparing for a village fete (with those seats we’d be the people at the entrance to the fete, with a metal tin full of change, fleecing you for all your cash). I like it!

It’s been something of a godsend in the HOT (yes, actually hot and sunny) weather we’ve been having lately, as it means I can sit in the garden without frying to a crisp.

Right, news on the ‘novel’… well, there’s nothing much to say except, there has been a small delay in proceedings. (For once Not My Fault!)

If you remember, in the last instalment, the novel was declared to be ‘ready’ for the outside world and before he went on holiday last week, my agent wrote a pitch, which I graciously approved and he was due to send the pitch out to lots of lovely editors, in the hope of tempting them to ask to see The Whole Thing.

But then, I got an email from him … and you know when you look at an email in your inbox and before you open it, you can read the first few words?

Well, the first few words were, “After a lot of discussion, we’ve.…” and my heart sank!

These are the thoughts that flashed through my mind.

So, when I read the email and it said that they’d decided not to send out the pitch until Robbie was back from holiday (mid-June) because they are currently sending out another pitch for another of their novels to the same editors (and it doesn’t make sense to have two novels from the same agency competing for editors’ time), I was elated and, quite frankly, would have agreed to (almost) anything.

So, there you are. It’s all still in limbo.

But that’s fine. I’m enjoying the relaxation in our lockdown rules and have been catching up with friends (some have even been to stay!!) and doing my usual: forgetting that I am supposed to ‘Carry on Writing’ (see what I did there?) and pushing all thoughts of the next novel to the back of my mind.

Congratulations to readers of this blog, Wendy and Julia (and possibly the winner Jennifer too but I don’t know for sure), who were placed second and third, respectively, in the Evesham Festival of Words’ 6-word story competition, which I mentioned on here. The results were published today and are as follows:

Our annual Six Word Competition has now closed, after receiving an impressive number of 249 entries! The worthy winner was Jenny Moore, with her entry ‘Apologetic magician seeks recently vanished assistant.’ Second place was won by Wendy Janes with ‘He lost pounds. They weren’t his.’ Third was Julia Thorley with her entry, ‘Missing man. Suitcase on baggage carousel.’ Many congratulations to all three winners and thanks to all who entered.

Aren’t they good? And every one is an actual STORY, inviting you to fill in the gaps and imagine what might have happened before and after. I’m impressed. If you’ve ever tried to write an original 6-word story you’ll know how hard it is.

The Festival now has a Limerick competition (theme ‘Around The World’) running until 30th June. It’s free to enter, one entry per person and please note that I am shortlisting (i.e.: I’m a judge!) so don’t put anything on here or on your entry that would identify you as it’s all judged anonymously and if I know who’s written one of the entries, it will send me into a tizz. Am sure you understand.

Have a go! Limericks are fun. You can be amusing and even a bit saucy, if you wish. (But go steady with the sauciness. Think ‘Carry On’** rather than ’50 Shades’ because nothing too rude will make it past our very strict censors!) 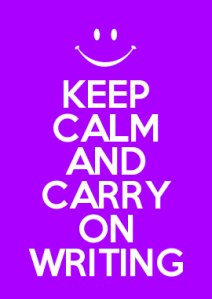 This entry was posted in Competitions, Kate Nash Agency, Novels. Bookmark the permalink.

8 Responses to (In which I) Carry On Waiting…