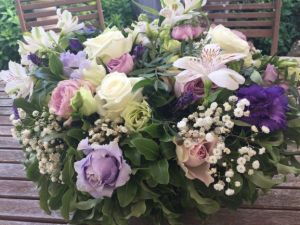 Now that Evesham Festival is over and the names of the winners of the short story competition have been announced, I can give you some feedback on my experience as a judge.

Another reader and I read all 126 stories and whittled them down (anonymously) to a longlist of 15, which were then sent to Vanessa Gebbie, the main judge.

It’s quite an eye-opener, reading that many competition entries and I learned a lot about what makes a good short story (and what doesn’t!), so it’s time to share my findings:

THE TITLE
A good title really lifts your story and can entice the reader to read it. Many entrants clearly hadn’t given much thought to their titles (there were several one word titles and clichés, even amongst the longlisted 15). Not important? But the title is the first impression a judge has of your story and your writing. Plus, if a judge can’t decide between two stories, the title could be a deciding factor.

The stories that took first and second place in the Evesham competition this year both had good titles (‘Heavy Traffick Trilogy’ by Alwyn Bathan and ‘Trudy North. Righteous Soul’ by Marcia Mackey).

IS IT A SHORT STORY?
If you’re entering a short story competition, ask yourself whether what you’re submitting fits the bill. It doesn’t matter how good it is: if it isn’t a short story, it won’t win.

We had monologues, a short play, character studies, autobiographical pieces and entries that were very well-written but that were clearly extracts from a novel.

In a short story, something has to happen (several entries fell down here). Even if the ‘something happening’ is only that the main character changes his/her mind. The hero must be changed in some way and shouldn’t be the same at the end of the story as at the beginning.

THE ‘HOOK’ AND THE TWIST
Lots of entrants clearly knew that your first line or two should act as a ‘hook’ and grab the reader but think ‘intriguing’ rather than ‘shocking’. There were quite a few shocking first lines, which then proved to be a hard act to follow (and which seemed too gimmicky and contrived).

Ditto twist-in-the-tale endings. I know there’s a school a thought that short stories should end with a twist (they really don’t have to) but twist stories are hard to pull off. If they don’t work, then the whole story just reads like a long joke, leading to a punchline.

SPELLING/GRAMMAR
Watch for typos and grammatical mistakes. Proof read your story carefully before you submit it; ask someone else to read it; read it aloud. Most entrants didn’t have any problems with this but a spelling mistake on the second line of a story (this happened) is off-putting and made me wonder how much care had gone into crafting and polishing that story.

CHARACTER
Short stories are essentially about character and it was no coincidence that most of the 15 stories that we long-listed had a strong central character, undergoing some kind of conflict or problem.

A short story is not a saga; there simply isn’t room for lot of characters (it’s confusing for the reader and we don’t know who we’re rooting for). Ask yourself, ‘Whose story is this?’ and focus on that character.

EMOTIONAL RESPONSE
Only a handful of stories brought a tear to my eye, or made me laugh or feel shocked and those were the stories that rose to the top of the pile. Your story needs to stand out from the crowd; it needs to be memorable.

Many were perfectly nice, well-written stories but they were also rather bland (and I know I’m guilty of this myself, when I’ve entered competitions in the past. This is what I mean when I say I’ve learned from this process!).

I got to the end of many stories and thought ‘So what?’ That’s what you want to avoid: the ‘So what?’ response from the judge. And by ‘emotional response’ I don’t mean by murdering someone in the first paragraph because I won’t care about any of the characters at that stage. That emotional response will only come by creating a convincing scenario and compelling characters and yes, I know, that’s not easy in 2000 or so words.

When she ran a short story workshop for us last October, the judge Vanessa Gebbie urged everyone to be brave and to take risks with their writing and that’s certainly what you need to do, to make your story stand out. A particular judge may not like it, of course but I think it’s true to say that no judge will choose a bland (or ‘safe’) story as a winner.

THE ENDING
I’ve come to the conclusion (ha! Pun intended), that when it comes to a competition entry, your ending is actually more important than your beginning.

This is because most judges worth their salt will plough on through the story, even if the start is not that gripping. A good ending can lift an otherwise ‘OK’ story but a poor ending – as I witnessed several times (and oh, it was so frustrating) – can ruin an otherwise fabulous story. So many stories just fizzled out at the end, as though the writer had run out of steam, or word count, or ideas. So many endings were a cop-out, or confusing or just plain dull. There were 5 or 6 stories that were in contention for the longlist but their disappointing endings let them down.

You don’t have to tie everything up, there doesn’t (as I said earlier), have to be a twist – or even a happy ending. But the ending does have to be ‘satisfying’ for the reader (and that’s part of your challenge, as a writer, to work out what ‘satisfying’ might be!).

And in other news…

I got married last Saturday! Wheee! Kept that all a bit quiet, didn’t I? That’s only because I didn’t want to jinx things. Turns out I’m really superstitious!

Here are a few little pics of the day, if you’d like to see them: